Kent Larus Bjornsson has sent more photos and a disptach in preparation of our Iceland Photo Tour – this time from the Snaefellsnes Peninsula:

“Catch it before it is gone – The Glacier Snæfellsjökull is disappearing.
The whole Snæfellsnes peninsula is a breathtaking natural wonder. Maybe that is why much of it has become a National Park. The glacier is shrinking rapidly both in size and thickness and will not be around much longer. Already on the west side in late summer you can hardly tell it is a glacier.

Another favourite spot for me on the peninsula is Djupalonssandur. (Deep lagoon sands). First look it seems like there is a lot of litter in the area, the metal pieces strewn across the sands are very historical. They are the remains of a British Trawler that grounded there. There was talk that they should clean it up but these iron bits of historical significance add to the character. They are constantly moving with the tide and weather – they should be left to nature. 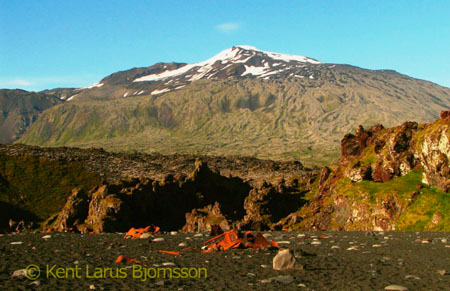 Why not give the lifting stones a try!?

These stones have also been around for a long time. The fishermen would use them to determine who was the strongest and thus who was the best fisherman. There are 4 stones, if someone has not walked off with the smallest. Their names and weights are Fully Strong 154 kg, Half-Strong 100 kg, Weakling 54 kg and Bungler or Useless 23 kg. If 23 kg is all you can handle you would not qualify to be a fisherman in Iceland.

The hiking trails around Snæfellsnes are exciting and full of surprises. It is not difficult to spend a week in the area. 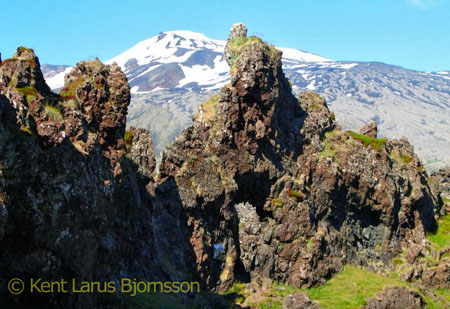 Where did Christopher Columbus get the idea of travelling to North America? It was in this area. It is believed that he visited the area in 1477 and learnt about the Viking voyages to North America. Now is the time to travel in his footsteps!”

Kent’s photos show the stark beauty of the region – look for the remnants of the British trawler! Snaefellsnes also hosts one of the few farms that still prepares arctic shark – the most unusual delicacies I have ever tried – it’s disgusting – and you have to try it when you go!

Another dispatch with photos from Kent Larus Bjornsson who will be leading us to his secret spots on the Iceland Photo Tour this summer:

“According to the British Newspaper the Economist, Reykjavik is now one of the cheapest cities in Western Europe. Just last year Reykjavik was the fifth most expensive city in the world. With the fall of the Icelandic kronur it has fallen to number 67 on the list. The only city in Western Europe that is lower is Manchester UK. What are the most expensive cities? Tokyo and Osaka, followed by Paris and Copenhagen. 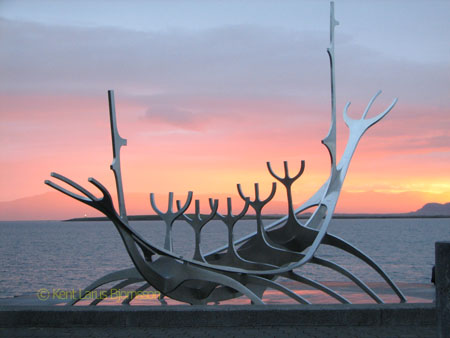 Reykjavik by the Arctic Ocean

The lower prices are great for visitors but not great for people that earn wages in kronur. The kronur has recovered somewhat so now is the time to visit Iceland. Even the rock band Pearl Jam is thinking of visiting and doing a concert!

Subscribe to the daily news email service to keep up with what is going on in Iceland.”

We begin a new feature today – a dispatch from Kent Larus Bjornsson who will be working with us on the Iceland Photo Safari – summer 2009.

“Iceland has 10,000 waterfalls – that means one waterfall every 10 square kilometers on average.

At Dynjandi, in far nortwestern Iceland, there are a total of 8 waterfalls within meters of each other. Dynjandi means resounding and that is what it is, all 100 m of it. Every few steps up the mountain is another spectacular sight. One of the falls it is even possible to walk behind.

Spend a short time or a whole afternoon. The mountain ranges and Arnarfjörður are spectacular from a position up in front of the main waterfall.

The waterfall Dynjandi is just above an abandoned farm of the same name. Imagine being a farmer with this natural pearl right above you!” 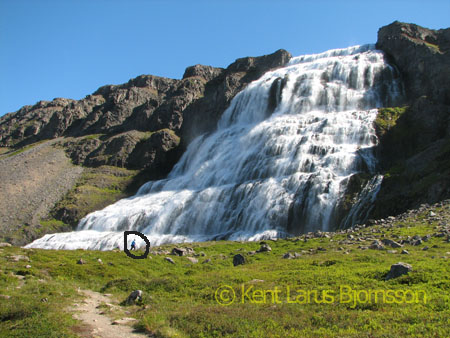 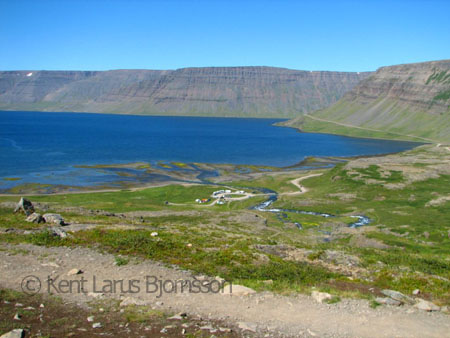 This Tuesday Harry Nowell demystifies some of the nordic charm of Iceland as he presents photos and stories from photo travels in Iceland:

All welcome. Prize to be drawn. See you there: 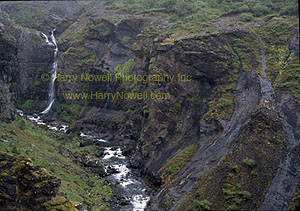 Your time is running out!

We posted a photo detective challenge before Christmas and are dangling a critique session for the winner chosen from the reasonably correct answers. Answers have been proposed and the winner will be chosen about the middle of next week.

Coming soon – we will be posting details about an Iceland photo safari. Stay tuned… 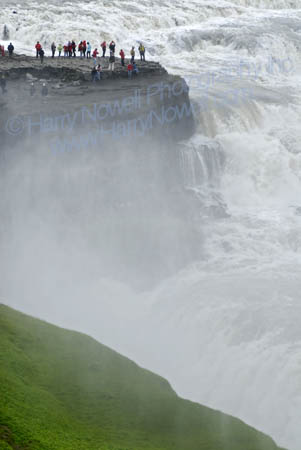 A few weeks ago I mentioned a photo contest at the blog of HarryNowell.com

Do not send any photos! This is a set of photo skill testing questions based on Iceland. A winner will be drawn from a collection of appropriate answers. The prize? A free live critique session in central Ottawa, Canada or an email based critique session for the rest of the world.

A winner will be picked from reasonably correct answers in early January. See our Iceland photo report from our Exposed! Newsletters. Also see Icelandic blog posts 104-109. 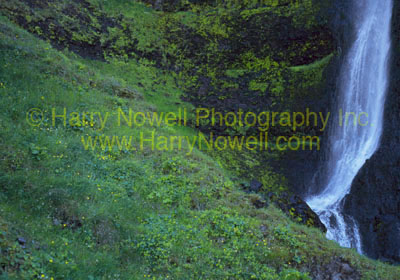 My list of places to visit has increased as a result of the trip. I plan to visit again soon. Thanks for your comments by e-mail – would love to hear from others about their travel and photo plans! 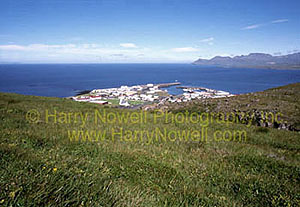 Back to usual programming next week!

The big city is Reykjavik – at 200,000 people it is small by world standards but a bustling, thriving, friendly city. If you find a safer city you’ll be lucky. It’s also a party place on the weekends. You may hear people singing on their way home from the bars at 4 or 5am …in an orderly fashion, of course. 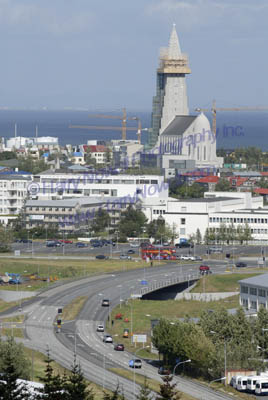 The city is clean, colourful and is the central hub of the booming commercial economy. Fishing, tourism, shipping and oil all work through the port city. 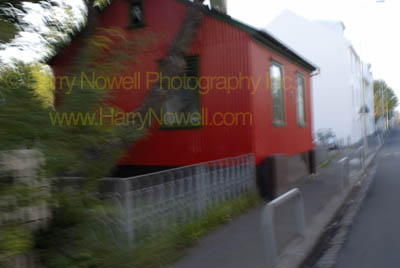 The city has a popular beach – Nauthólsvík – nestled close to the city centre where people lounge on the golden Moroccan sand – yes, imported – and swim in the thermally fed North Atlantic / Arctic ocean. It’s packed when the weather is fine! It was close to 30C (a scorcher for Iceland) this day: 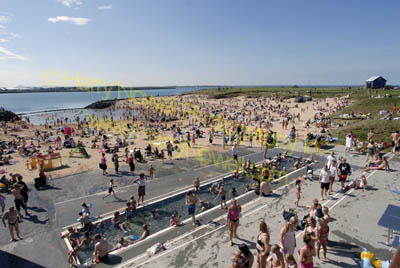 This is the continuing post of my recent Icelandic photo adventure. We traveled for two weeks – some was vacation with my wife – some was work for my agencies after my wife returned to Canada.

The Icelandic people have written literary masterpieces – the Icelandic sagas. Recent authors are winning awards, too! There is also much suggestion of trolls and mythical creatures. Ahem: 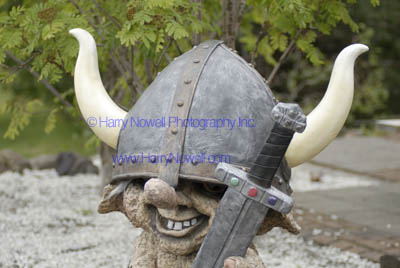 We visited a farm on Snæfellsnes and saw their small fishing and shark museum. Icelanders still catch the Greenland shark – an arctic, cold water species that thrives in sub-zero water. The shark is toxic to eat because of the ammonia based, natural ‘antifreeze’ that allows it to survive its habitat. 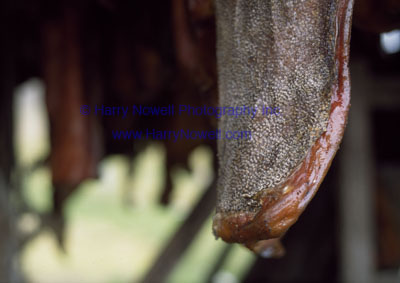 It is edible after being buried or cured for four months. We got to taste this delicacy – Hákarl. It is disgusting – the overpowering ammonia drowns out any other flavours. If you are there you have to try it! 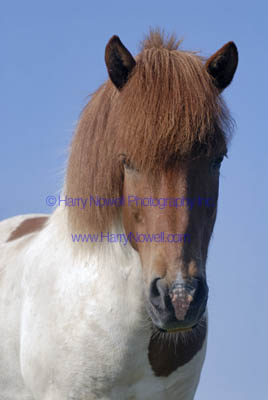 The horses are small, stocky and hardy. Beautiful and curious, they emigrated from the celtic and nordic regions with the Icelandic people. Spectacular animals! 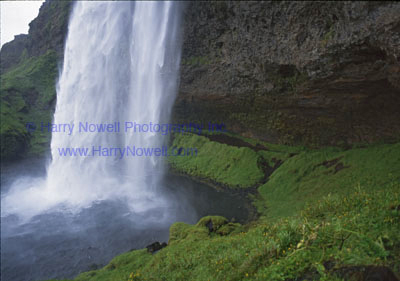 I added “I know I keep saying ‘wow’ but it keeps being true!”

That sums up most of Iceland and especially the waterfalls. It seems everywhere you go there is water falling – sometimes thunderous, sometimes melodic. 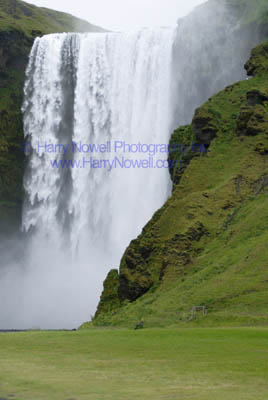 Iceland is a photographer’s paradise. Everywhere you look there is something pretty spectacular. The weather changes so much you can shoot the same subject many different ways on three very different days. 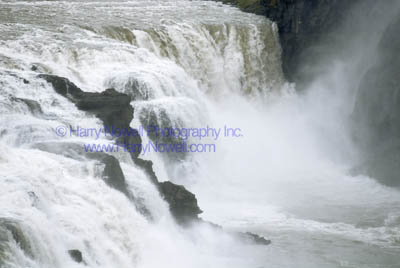 Stay tuned for more photos and stories all week.