Recently, I observed a student doing nothing, quietly, in a classroom. I approached to help them clarify, support or initiate their work. To me, it was clear what was going on.  They were BORED.

I confirmed my suspicions through a direct question. I was correct. At this point urging them to complete the assignment does little to help them learn.

Teleport to a different environment where children are playing* on their own terms: Learning happens by default because they’re engaged in something that interests them. They’re experimenting. They’re trying new things and they’re learning. 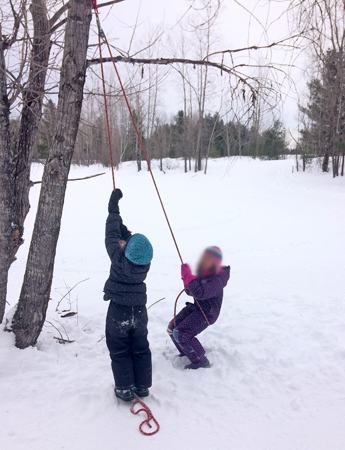 * I use the term “playing” with trepidation. Many consider playing to be the opposite of learning: “learning is serious business. Play is frivolous…”  Two thinkers in education – Vygotsky and Sobel suggest play grounds learning.

David Sobel suggests there are seven kinds or motifs of play. Like Vygotsky, Sobel places much emphasis on significant learning through play.

Anecdotes from prominent people also suggest the validity of play as a conduit to learning:

In ‘Boy‘ his childhood memoir Roald Dahl confesses of only two memories from his formative kindergarten learning days.  “I can remember oh so vividly how the two of us used to go racing at enormous tricycle speeds down the middle of the road and then, most glorious of all, when we came to a corner, we would lean to one side and take it on two wheels.”

I play, teach and learn one day a week at Forest School. Through recent observations of students’ play with rope I experimented with learner led and teacher led learning.

I often have rope in my Forest School pack – it’s a versatile and practical tool that has many uses. A student became interested in using the rope to help her get up a tree. After some initial student investigations she started asking about pulleys. I developed two scenarios – a teacher directed “lesson” about the benefits of pulleys and some unstructured rope/pulley play time – for the students. I observed and learned.

The “Lesson” (ie Teacher Directed)
To demonstrate the benefits of pullies and rope I set up a “three-to-one” and “one-to-one” pulley system. I suggested students haul a weighted toboggan to experience the differences in pulley systems. Students followed the directions and successfully completed the challenge. There was no enthusiasm and little further exploration occurred. 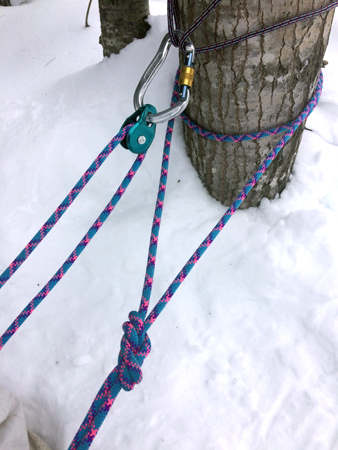 The “Play” (ie Student Directed)
I dismantled the climbing equipment and left it for the students to investigate as they wished. Slowly, the real learning began. The “pulley student” picked up some equipment and started experimenting (playing) with building her own system. She built, with assistance, an elevator contraption to haul her friend up a tree.

Another time students initiated play with toboggans and the climbing equipment. They attached ropes to toboggans and started playing. From an educational perspective I observed practical use physics, forces, ropes and social problem solving skills being learnt with far more enthusiasm than my lesson. The students also spent far more time with their self directed “play” than with my lesson. 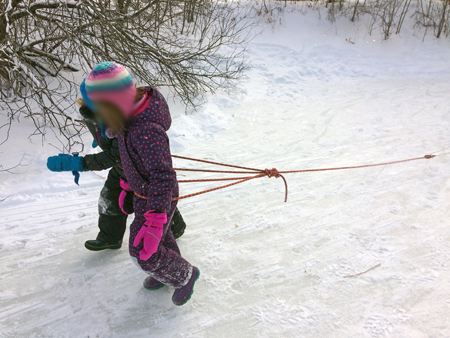 I see both pedagogical platforms – teacher directed and learner led / play based scenarios – have value.

Teacher directed environments allow students to be able to replicate information deemed important by others. However, the risk and possibility of limited retention, disengaged students, and increased misbehaviours is much higher in a traditional teacher led scenario.

Student directed play and learning increases engagement, flexible directions and social development of ideas.The risk of missing specific elements of a curriculum expectation is easily possible if the student’s interest veers away from the mandated curriculum material.

There is great potential for enormous learning if the learner led model is supported by  arms-length support from the teacher to provide connections and culminating summation of concepts. The interest, intrigue and final outcome can be so much more significant if play is initiated and followed through by the students.

My reflection and growth in education leads me to more questions:
• I ponder the correct balance of learner led and teacher/school board/ministry directed curriculum.
• Is there a danger of too much student directed learning?
• Will students miss important, foundational learning – base math, elements of literacy – because individual students lack interest?
• Or will they naturally find a need for a rounded education on their own?
• How much influence should the teacher project onto the learning canvas of the students?