Today we offer the final installment of responses to “Wise Words from Working Photographers.”

This quote comes via the interent from another Chris – he includes a link to a comic to make his fine point:

“The best photo-related quote that I have heard – by far – comes from What The Duck – a comic.

I imagine this is a variation on the story of a photographer at dinner whose host says “I love your pictures. You must have a really nice camera“.

The photographer responds by saying “Dinner was great. You must have really nice pots and pans.”

Anyway, I think it nicely illustrates the point that the most important part of taking a picture is the person behind the camera. As photographers, it is good to be reminded of this and not get too carried away with lusting after new gear. 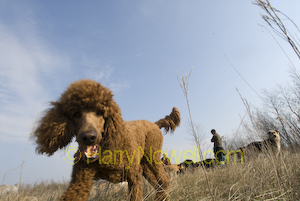 Poodle Photographed by Harry, assisted by the camera.

… a third installment of responses to “Wise Words from Working Photographers.”

Chris, a student of my Creative Fundamentals, Urban landscapes and Night Light photo workshops weighed in with this wise quote:

“If nothing’s changed, don’t change anything!”

Chris explains: “People get intimidated by ‘manual mode’. If they’re shooting under the same light, outdoors in the middle of the day when light isn’t changing, don’t mess with settings. Check histograms to see if you got it. Or just bracket -1, 0, +1 f-stops and pick the exposure you like.” 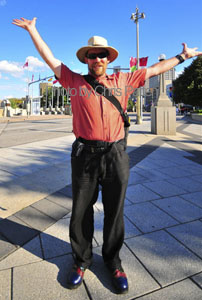 “The quote ‘Hang out with those who are better than you.’ really got me thinking. I really believe the opposite or at least an adjustment of the rule.

I think I’m able to sum it up with this: ‘Study those who are better than you but hang out with those who aren’t.’

At least where I am now in my photography, I have more times been inspired by a beginning photographer than the big named photographers we have grown to love. Sure, there are plenty of big names that I follow and admire but something happens when we grow in our photography. A lot of us move so far ahead that we forget the simple and aim for the complicated.

A beginner’s eye can remind us of the things that excited us when we first started out and their questions can get us thinking again about the hows and whys we do things the way we do.

For anyone at a level above beginner or hobbyist, I encourage you to attend or set up a meet-up, perhaps hold a workshop or a class. It’s a win-win situation. The beginners learn from a more advanced photographer and you’ll surround yourself with fresh minds.
-John”

Here it comes – a couple weeks ago I posted our latest Exposed! photo newsletter – Wise Words from Working Photographers. Other quotes started coming in – wise words – from photo fanatics. Today is the start of a feature where those tidbits are shared.

To start off this section Exposed! reader Dave sent in these wise words:

More quotes in the next post. Winter has arrived in Ottawa – below is a stock photo from a shoot in our fun winters! 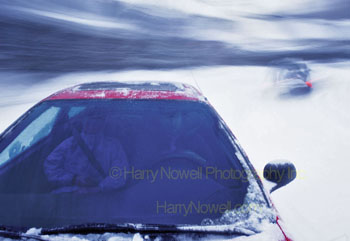 I keep saying tomorrow I will post wise quotes as a follow-up to my last Exposed! Newsletter “Wise Words from Working Photographers.”

Alas, regular programming has been interrupted again. Last night I went to see Neil Young in concert in Ottawa. I was a paying fan this time not a media photographer. So I was not going to comment on this blog… but it was a good show! Read a review and some media shooting ideas, etc.

First, Neil Young was pretty amazing. His wife was his back-up singer – nice to see them together. There were all kinds of idiosyncrasies on stage like the fine artist hidden at the back working on canvasses. He did an encore… a set of Beatles tunes. Oh, I admire what he has done.

I left all cameras at home – even my teency point and shoot – as I was not working. And I was longing to be shooting the show. That’s a good sign – if the spark or urge to shoot doesn’t exist that’s a sign of burn-out!

I also checked the media pit at the front of the stage – I recognized veteran Ottawa media photographer John Major. I have shot a little for newspapers and it’s a tough job down there in the pit. Technically, there are some challenges beyond solid skills – mostly anticipating the performers and being in the right place at the right time.

The tough part can be the logistics. At performances, photographers usually get 10 minutes or 1-3 songs to capture their photos. Shows often start at 9pm. Deadlines are often between 9 and 10pm. You need to shoot, download, edit and send photos in a very short period of time. Any significant glitches and you are cooked. Neil Young should be front page of a newspaper section – there is no room for glitches!

I have shot many shows with work going to different clients from the Ottawa Sun to Tourism Canada. Photos have appeared in magazines, newspapers and websites in the US and Canada. Some coverage:

Ok, ok, I know I said yesterday I would be posting photographer’s wise quotes on creativity and photo but I just saw a review of the new Nikon D3x. So this news pre-empts regular programming!

The Nikon D3x has been a long awaited mythological machine – rumoured for many months to be “available soon“. The hubbub existed because the new D3x was expected to answer many Nikon users requests:

I say a “reasonably big file size” because it is not BIG. It is as big as available in production models currently available. I have been asked for BIG files from prospective clients and that meant film. The D3x now produces a file as large as I can get from a 35mm piece of film on my Imacon/Hasselblad scanner. The D3x will produce a different looking file – film and digital have their own distinct looks.

I never liked the DX format. It exists because the chip (sensor) in the camera is smaller, therefore costing less to produce. The small sensor creates a smaller file size – ie less pixels. The DX format also causes your 50mm lens to work like a 75mm lens which is great if you want long telephoto lenses but a struggle if you like the wide angled fun.

I am curious about the D3x. I have digital cameras but really use them for smaller work – magazines and other work where the required output is smallish. The D3x would open my digital sourced capability – it may be time to look at a purchase.

And tomorrow, back to regular programming… 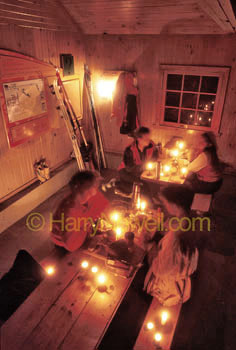