Yan Huckendubler is a graduate of some of our photo courses and is enrolled in our upcoming Summer Sport Photography with Blair Gable in September, 2012. He concentrates mostly on sports photos and this summer had the good fortune to be involved in the London Olympic Games. Yan has been to many international events in a supporting role. We’ve been lucky enough to receive a few of his posts from the field before.

Here is his guest post describing his experiences at the Olympics this summer.

Media Officer at the 2012 Olympic Games in London

“I was privileged to be appointed as Media/Web Officer by the International Hockey Federation (field hockey) for the London Games, my fourth involvement in the Olympics after Sydney 2000 and Athens 2004 as Media Attaché for the Canadian team, and Beijing 2008 with the International Federation. 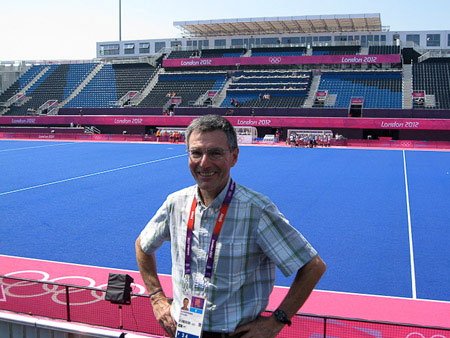 Riverbank Arena, venue for the Olympic field hockey competition; the Media Tribune is just behind me (the cover is for the VIP section, not for the media section…)

It is amazing to realize the jump in technology in these twelve years. In Sydney, the internet was still in its infancy and updating a web site was a slow and expensive process over a phone line, when in London fast and reliable wired internet access in the Media Tribune and Press Centre allowed instant updates of our web site. The leap is even more impressive for photography. In 2000, most photographers were still using film, which needed to be processed by the Press Centre lab then scanned to produce a digital image. In London, our photographers made photos available so quickly that we could post or tweet them while the match was still in progress.

These Olympic Games were superbly organized to the smallest detail, in excellent spirit, with a large number of well trained, efficient and always smiling volunteers (or “Games Makers”, as they were called). It certainly helps to have the Games in a country of sport connoisseurs, just as in Sydney in 2000 (for the Australians “too much sport is still not enough”!). 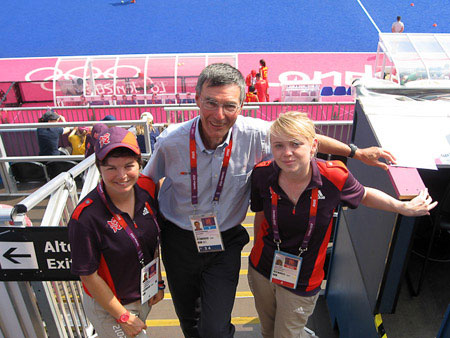 The Riverbank Arena was a brilliant venue for hockey and its blue and pink pitch will remain one of the striking visuals of the Games. 16,000 spectators filled each of the 3 daily sessions during the 14 days of competition, making hockey the third most attended sport at these London Games (after athletics and football), a fact that will probably surprise Canadians, given the profile of field hockey in our country. It is really a pity that this facility was only temporary and that the 1,600,000 pieces of scaffolding tubes will be soon dismantled. 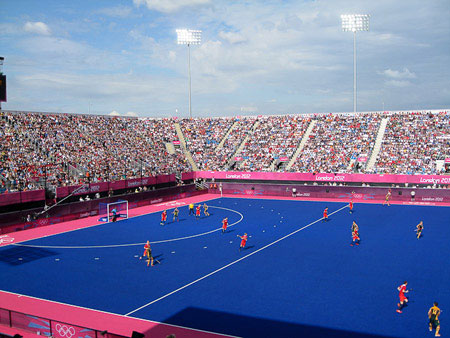 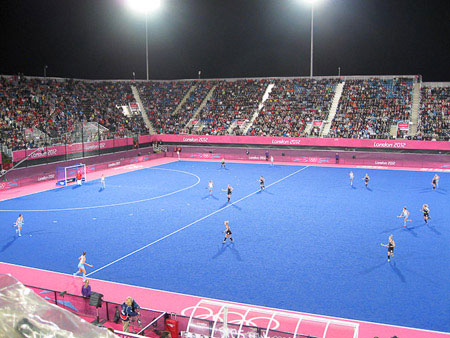 During the day or in the evening, the venue was always full to capacity

The facilities for the media were excellent… although there was of course the slight problem of the uncovered Media Stands. It still baffles everybody’s mind that the organizers deliberately decided to leave completely exposed to the elements a stand that would be used during 14 days by broadcasters and journalists all with electronic equipment. Working on our laptops in some of the downpours of the first week was an act of faith, despite the efforts of the volunteers to protect us with plastic sheets and to mop up the water accumulating on the tables…

This is where my desire to be ultra-prepared came in handy: I knew of the situation and did some research that unearthed a unique “tent” to protect your laptop against the elements. I tested it at home and then was the only person able to sit in the stands and actually continue to work… until the rain was too torrential and we all had to run for cover. It makes for good stories later around a drink, but it was certainly not fun while it was happening… 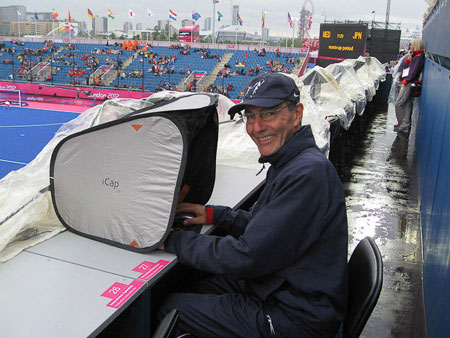 My “laptop tent” proved very useful on the wet days (it does not rain in England, it is just relentlessly humid…)

I enjoyed sitting at my desk in the Media Stands early in the morning, before the start of the daily matches, preparing my files and notes for the day, sharing a cup of tea with the local volunteers, watching the spectators slowly fill the stands, and generally savoring the privilege of working in an “office” with such a unique view over 76 matches of top level hockey during two weeks!

We also had the regular visit of Kate Middleton, aka “Catherine Duchess of Cambridge”, a hockey player herself in her pre-royal life, who was always triggering much effervescence among the spectators and photographers, not to mention the young volunteers who all turned to avid paparazzi during the few minutes it took her to stroll from the stands to her waiting car. 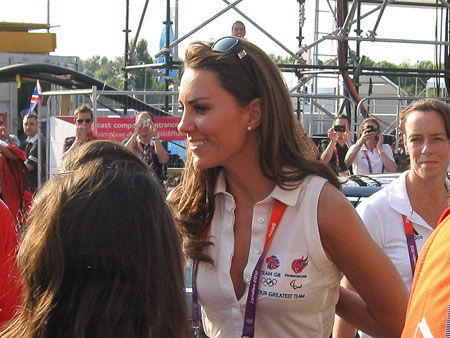 As for the Federation web site, the goal of our team was to provide fast (but accurate) information to the numerous fans around the world following on the internet. We were 3 photographers (from Australia, France and The Netherlands) and 2 media officers (an Irishman and myself). During each match, we were tweeting the highlights and some pictures, and the web site was updated with scores, standings, reports, official match sheets, plenty of pictures and players’ quotes within minutes of the end of play.

We finished exhausted, but if asked would all do it again without having to think twice! There is no question that it is a rare and unique experience, as well as an honour, to be an active, contributing participant in a sporting event which is undoubtedly the centre of the world for two weeks!” 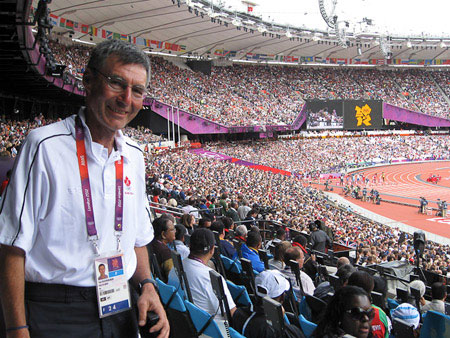 What do you do in your one day off? Go and watch some more sport, of course, but without a laptop for once!

This site uses Akismet to reduce spam. Learn how your comment data is processed.