Last winter we pitched a story on outdoor pick-up hockey in the Ottawa area.

Hockey is life for many people in Ottawa. And we’re not talking Ottawa Senators or even Ottawa 67s. We’re talking beginners, kids, adults, retired pros, new Canadians, men, women – many, many people are touched by the hundreds of make shift rinks in the region. 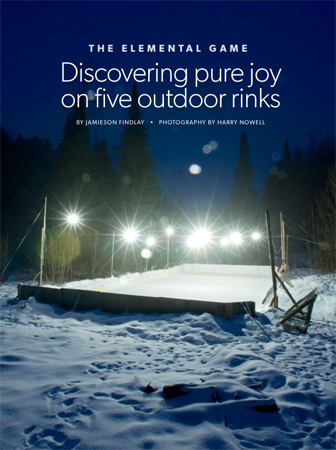 Many rinks are supported by the city but hundreds unofficially appear on ponds, rivers and in backyards. And where there is clear ice people will appear with hockey sticks!

Ottawa Magazine was very supportive of the story idea and approved the story quickly. Writer (and avid hockey player) Jamieson Findlay wrote about the region’s pockets of hockey from the perspective of a player.

You can read the article and see the rinks in Ottawa Magazine on news stands now!

And in related news, if you want to hone your hockey PHOTO skills consider our Photographing Pro Hockey Photo Workshop with access to media shooting locations at an Ottawa 67s hockey game.