Ok, this has been on my list of blog posts for a while – here goes.

I do some work documenting artwork and also run a presentation called Photographing Artwork for Promotion – helping people figure out how to get better photos of their art when there’s no budget to hire me for the photos.

Both shooting and teaching the subject are fun and, quite some time ago I posted photo of a piece I documented of Fiore de Henriquez – she was an Italian sculptor living predominantly in London, England – most renowned for her bust work of prominent people such as the Queen Mother, JFK, Laurence Olivier. 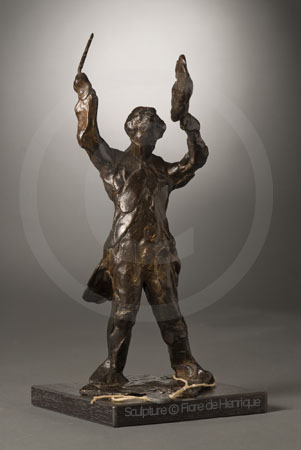 I was also lucky enough to get to know Fiore a little – she was very good friends with my Dad’s aunt. Fiore passed away in 2004

I posted one of Fiore’s pieces I documented on the blog a while back. And sometime later I got an email from Texas  filmmaker – Richard Whymark – who was creating a documentary on Fiore’s incredible life.

He found me through the Fiore post and ended up flying north to interview my father and I about our experiences with Fiore.

It was quite fun to connect in Ottawa with a Texas based filmmaker about an Italian sculptor  – all because of a little blog post and google.

Learn more about Fiore and see some clips from the film project.